While it is important to be thorough when purchasing PC components, it is arguably the most critical to be meticulous when looking for a motherboard. Motherboards bring your PC parts together; they connect everything and turn a collection of parts into a functioning machine.

Intel X series processors are fast, overclockable CPUs that fit the LGA 2066 socket. If you’re interested in the speed and performance they provide, you’ll want a motherboard to match its capabilities. Motherboards using the X299 chipset are considered to be high-end boards that are designed to fit Intel X series CPUs. This chipset can be used in conjunction with Intel i9 series processors as an i9 motherboard.

In this guide, we will go over the best Intel X299 motherboards you can buy. Then, we’ll go over everything you need to know in order to make the most informed choice. 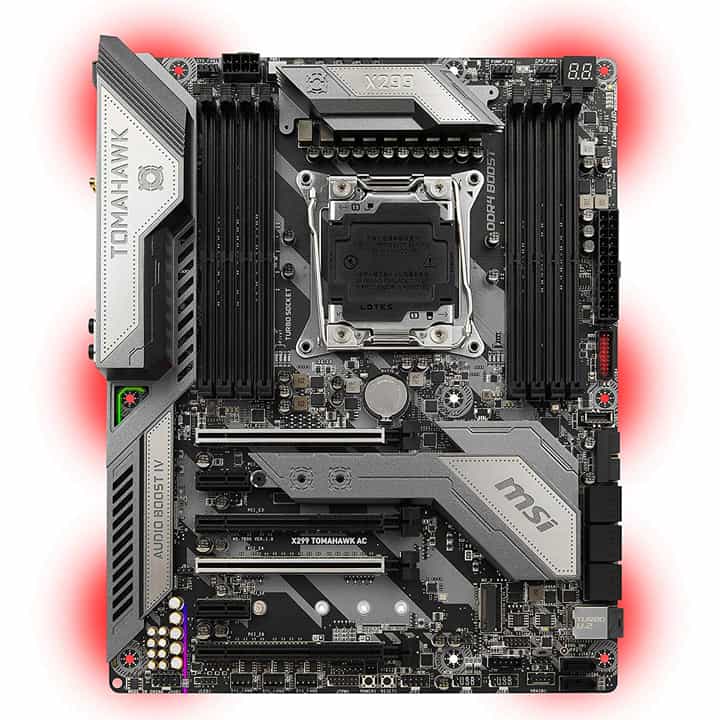 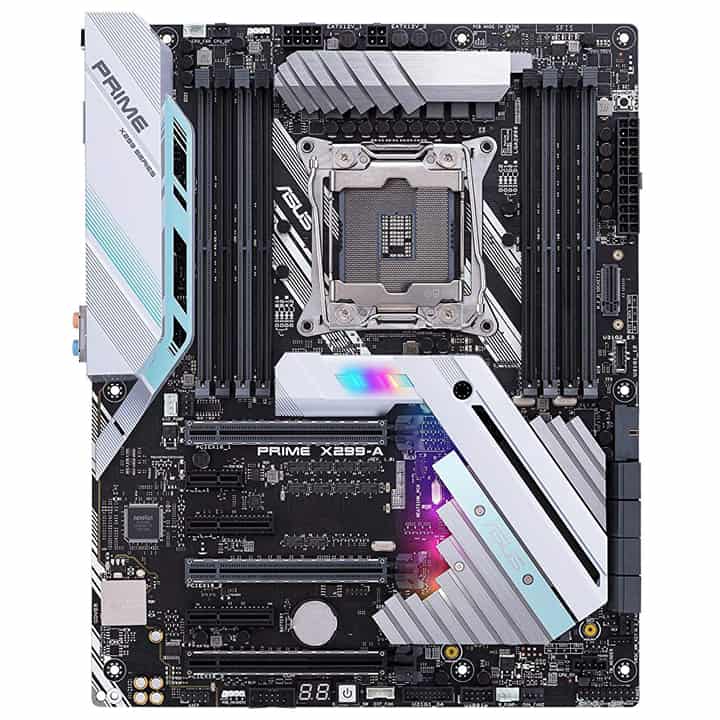 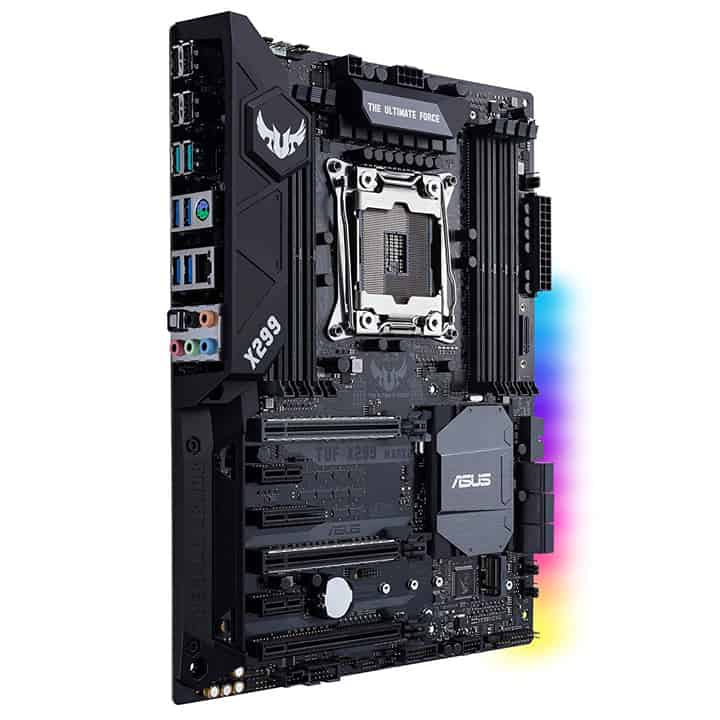 most sturdy and stable 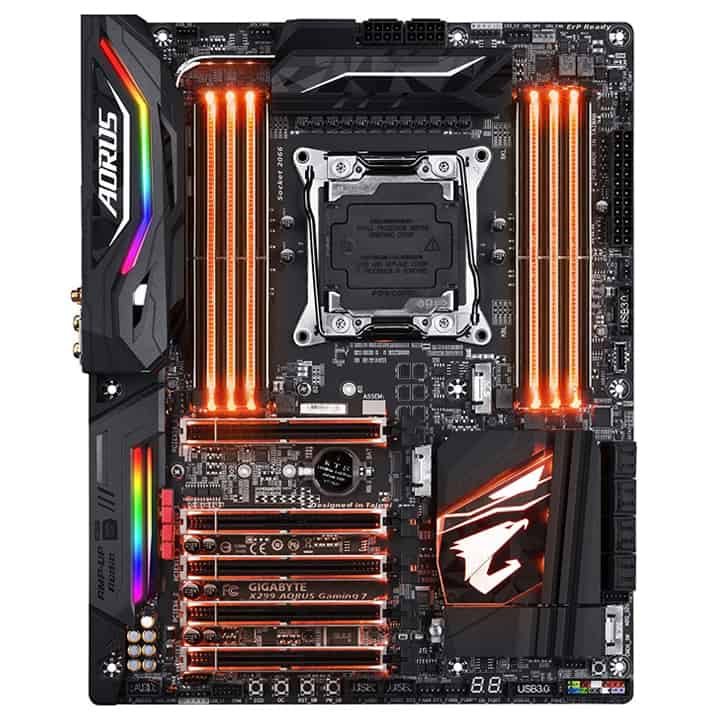 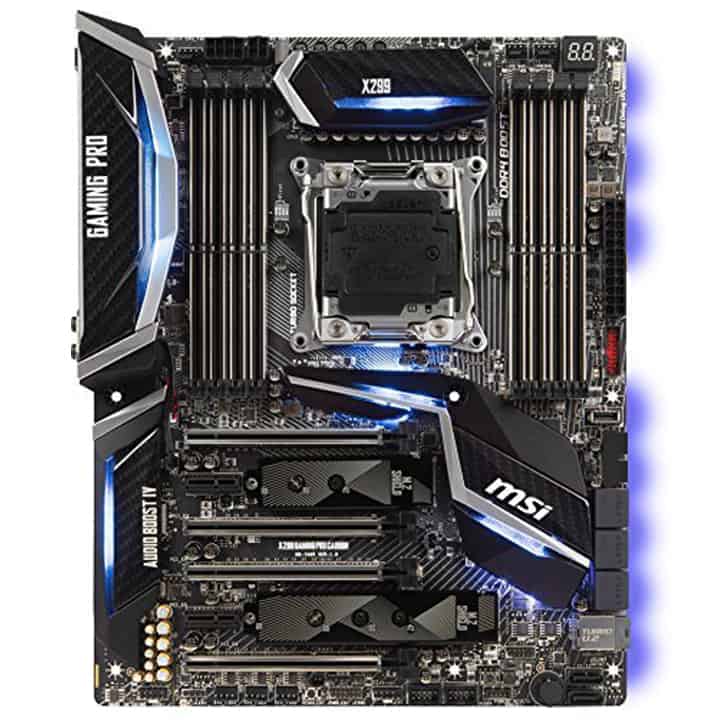 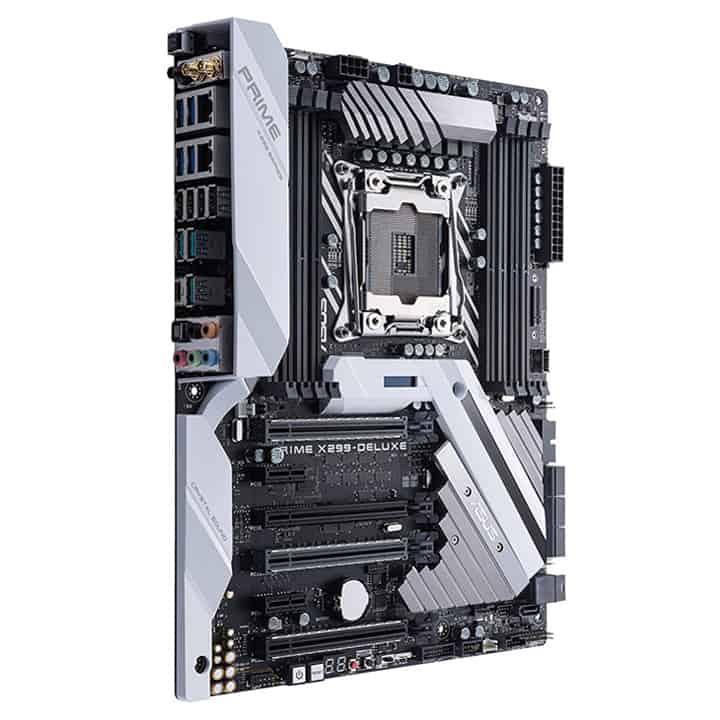 The MSI X299 Tomahawk comes with a variety of features at an excellent price. It is VR ready, making it a great option for a gaming setup. It is an ATX motherboard, meaning it has plenty of space for add-ons.

It includes M.2 and U.2 slots for connecting solid state drives. This is great for reducing boot times and storing programs to load quicker. It comes with four PCI Express 3.0 x16 slots and supports Nvidia SLI as well as AMD Crossfire. Up to three Nvidia cards or three AMD cards can be used in conjunction to maximize gaming performance. Is that overkill? You know the answer, but if you’re made of money and want to do that, then this lets you.

This motherboard also includes eight RAM slots, allowing up to 128GB of DDR4 RAM to be inserted, with clock speeds of up to 4133MHz. With this many slots, you’ll never be running low on memory.

It also has a variety of other features such as RGB LED lighting, DDR4 Boost, Intel Optane Memory supports, and more. One downside is that this motherboard has some difficult to tweak overclock settings, which may take some configuring.

Filling the gap between gaming-centric and utility motherboards, the Asus Prime X299-A is another affordable choice with a good selection of features.

This motherboard also has an M.2 slot with a heatsink for SSDs, if you’re in need of faster storage drives. It also features Intel Optane Memory support, Intel Gigabit LAN, 8 channel audio, and Aura RGB LEDs, among other things.

It has good overclocking potential as well. One of the few drawbacks is not having enough USB 2.0 interfaces.

The most sturdy and stable motherboard

Just like the last two motherboards on this list, the Asus TUF X299 Mark 2 supports Crossfire and SLI technologies for up to three GPUs. It comes with three PCI Express 3.0 x16 slots, which should be enough for most users.

Where this motherboard stands out is its durability and strength. As part of the Asus TUF series, it is made from military-grade caps, chokes, and MOSFETs for rugged performance.

Most Stylish and Best LGA 2066 Motherboard

For those looking for a polished and flashy motherboard, the Gigabyte AORUS delivers in a sleek package. However, this motherboard has the features to back up its flair.

It delivers five PCI Express 3.0 x16 slots, which is more than any other motherboard on this list. You won’t be running out of space on this board any time soon. In addition, it supports 3-way SLI and 3-way Crossfire.

For storage, it has three M.2 slots for SATA or PCIe SSDs, as well as U.2 support. The sheer number of high speed storage options is another highlight for this motherboard. It even includes Thunderbolt 3 support through AIC (Add-in Card).

This is a top-tier product brimming with features and ports, all bundled in an aesthetically pleasing design. Expect a price to match though.

The MSI X299 Gaming M7 ACK motherboard is a great choice for gamers, and has a sleek futuristic look. Like the other boards listed here, it supports 3-way Crossfire and 3-way SLI. It has four PCIe 3.0 x16 slots to allow for this and anything else you’d want to include.

For storage this board brings a U.2 port along with two M.2 ports for SSDs. It boasts very stable performance, and an admirable BIOS.

Gamers looking for a dependable motherboard should be excited by the strong variety of features and extras included to push performance to the limit.

The Asus Prime X299-Deluxe is an upgraded version of the Asus X299-A mentioned earlier. It includes four PCIe 3.0 x16 slots, one more than the X299-A. Crossfire and SLI are supported up to a 3-way configuration.

Additionally, it has two M.2 ports with heat sinks included, along with a U.2 port. These are great options for adding an SSD to give your PC the speed boost it needs.

This board is made of high quality components and has great cooling features. Along with the already mentioned features, this motherboard also includes Asus SafeSlot, dual Wi-Fi, Asus Sync RGB LED lighting, Intel Optane Memory support, and more.

Combining quality construction with a plethora of features makes this board a great choice for serious gamers who need a solid gaming motherboard.

What to Look for in an X299 Motherboard

When it comes to PC building, processors and GPUs are normally the things that people set aside the majority of their budget for. However, a good motherboard chipset is equally crucial as it serves as the connector between all the important components of your rig. Before buying a motherboard, make sure to consult this list of features to look out for.

Most expansion slots on motherboards come in two varieties: PCIe x1 slot and the PCIe x16 slot (although there are other types). PCIe x 1 slots are used for things like USB expansion, sound cards or SATA drives. PCIe x16 slots are larger and are used for bigger expansions like graphics cards or PCIe storage units.

If you are planning a more modest rig with a graphics card, a few USB and SATA expansions, and maybe a sound card, then you should be just fine with a ATX or Micro-ATX board as most of those have at least one PCIe x16 slot and 2-3 PCIe x1 slots.

In general, the higher end the motherboard, the more expansion slots it will have. However, many motherboards are built to turn off certain connectors when others have things plugged to circumvent bandwidth limitations. This means that you will likely not be able to use everything plugged into your motherboard all at once if you have it completely loaded up, though the specifics of this differs greatly depending on the product and series.

Make sure to check any product manuals before buying so you can get a better picture of how the motherboard allocates resources. That way you can know the most efficient way to set it up.

RAM is a type of memory. However, unlike your hard drive, which stores data for as long as it can, RAM will only hold onto data while your computer is turned on; this is why it’s called volatile memory. The purpose of RAM is to help move around all the complex info the CPU needs to perform frame-by-frame calculations. This is why RAM can have such a large impact on the performance of your computer.

Most mainstream motherboards come equipped with 4 slots for RAM which can run in Dual-Channel or Quad-Channel. Without getting too verbose, RAM doesn’t really work well with 1 stick, it’s best to have at least 2 identical sticks to get maximize your RAM’s efficiency. (Check your Mobo’s manual when inserting RAM to make sure it’s running in Dual-Channel; the setup is different for most boards.)

Overall, video games aren’t exceptionally RAM intensive since the GPUs (and their own dedicated RAM) do so much of the heavy lifting. As such, having 8GB-16GB of RAM will get the job done just fine. 32GB is really only required if you do streaming or video editing. All of these motherboards support up to 128GB of RAM, which is far more than you would need for most normal computer applications.

If you want to know more about RAM, then check out our buyer’s guides about RAM and DDR4 RAM in particular.

All of the Ports!

Also, make sure to check the kinds of ports included on the motherboard. Here is a list of some common port types:

Many motherboards also offer ports and slots for audio devices and cards (usually via the PCIe lane). Most of the time, the included onboard audio processor will get you by just fine unless you are particularly picky about sound.

Check to make sure the included audio processor in the motherboard is good enough for you. Alternatively, you could just use a dedicated audio card. If you do that, you’ll also need high quality speakers, or headphones to take advantage of the increased audio-quality.