Nowadays, having a good internet connection is almost a necessity. We use the internet every day to work, play, get information, and stay connected.

In order to connect devices to the web a modem and a router are required. A modem connects to your Internet Service Provider (ISP) and receives information from them. From there, a router distributes the signal to other devices, allowing them to connect to the same network.

In the past, it was necessary to purchase the two separately. Advances in technology have made it possible to fit both into one machine, known as a modem router combo.

There are many different modem router combos on the market; each providing a different set of features and specs. Making informed purchases can help consumers save money and improve their internet speed.

In this article, we will cover the best modem routers you can currently buy. Then, we’ll cover all the information you need to know to make the best purchase for yourself. 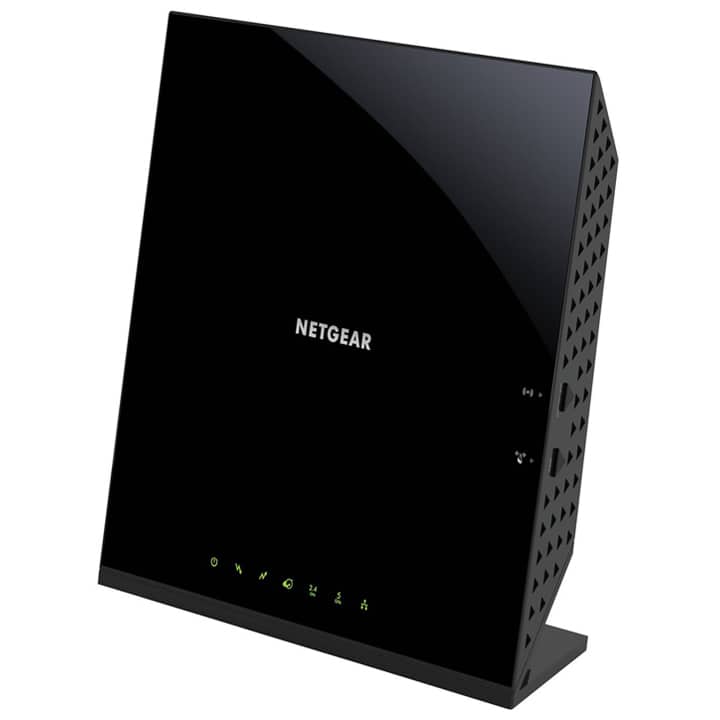 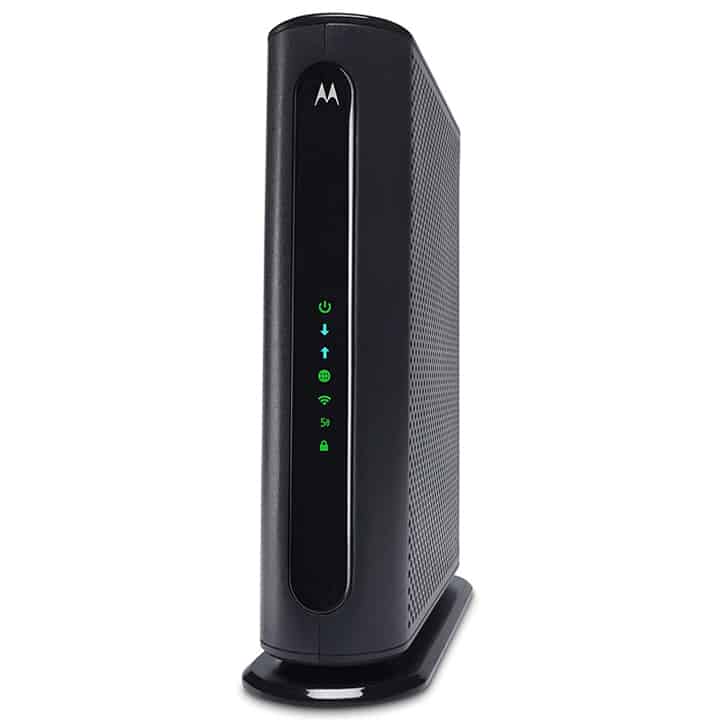 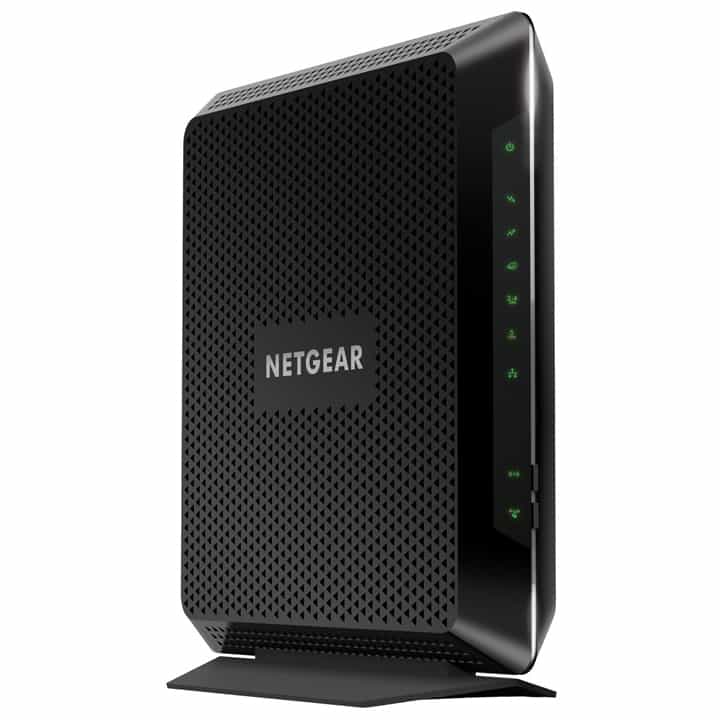 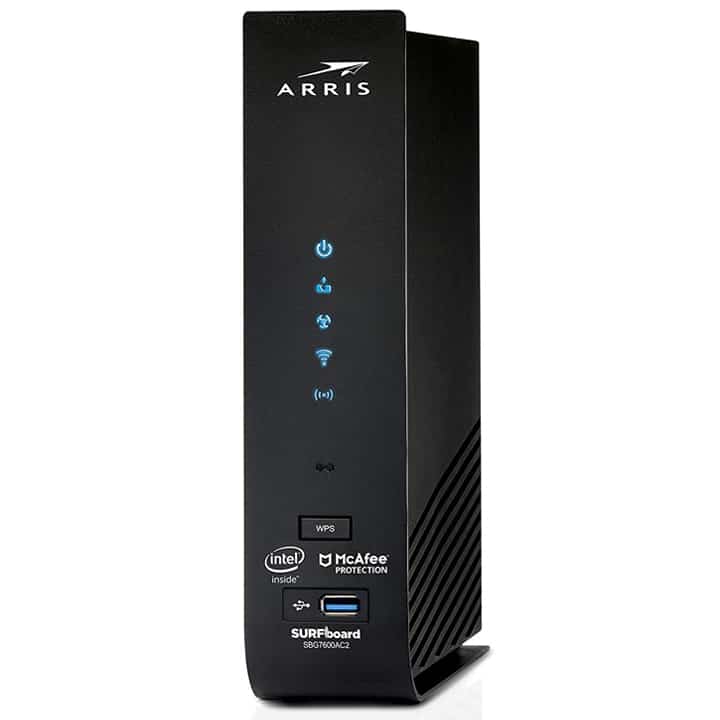 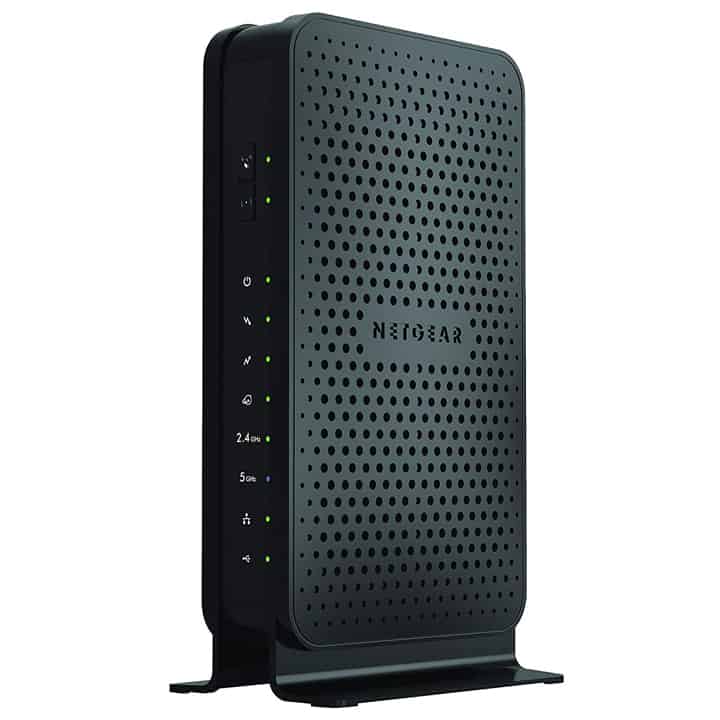 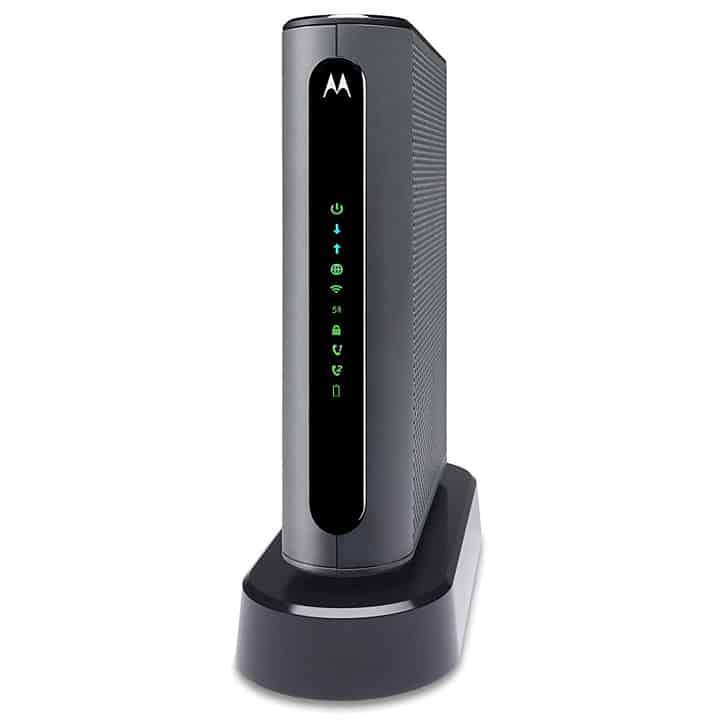 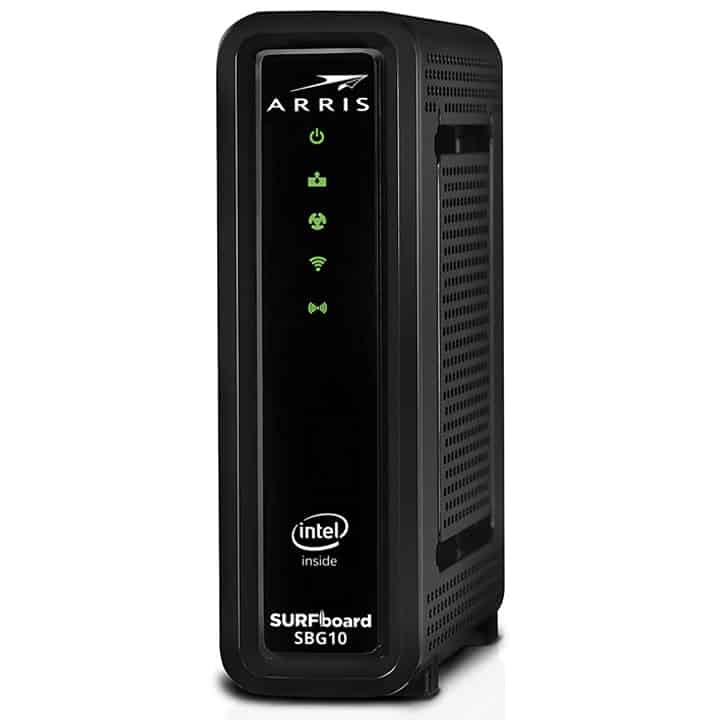 Netgear is a popular brand with a lot of well-deserved recognition for their high-quality products. The C6250-1AZNAS is no exception, and boasts excellent performance along with great configurability.

This modem/router combo brings a respectable top speed of 680Mbps, which should leave plenty of room for most people to upgrade their internet in the future. With a 16x4 channel configuration, this modem/router can provide a decent amount of bandwidth for periods of heavy internet use.

This router is a dual-band box, so you can switch between 2.4GHz and 5GHz depending on your usage. 5 GHz wi-fi is better for purposes that require fast internet, like online gaming, while 2.4 GHz is slower but has a longer signal range.

Also included are 2 Gigabit Ethernet ports if you prefer a wired connection. As far as security goes, this modem/router combo includes DoS protection as well as WPA/WPA2 and SPI/NAT firewalls.

Motorola is another company well-known for their modem and router products. The MG7550 is the very option for those looking for an AC1900 modem/router.

Similar to the last router on this list, the MG7550 has a 16x4 channel bonding configuration, which will come in handy if multiple devices are accessing the net at once. This router can handle download speeds up to 686 Mbps and upload speeds of up to 123 Mbps. While not absolutely top-tier, this should be more than fine for most applications.

Another benefit of this router is the inclusion of dual-band wi-fi, which gives you more control and flexibility when deciding between signal speed and range. In addition, this modem/router combo has four Gigabit Ethernet ports, which should be an ample amount, even for those who prefer wired connections.

Other features include a power boost function that extends signal range, and DoS protection. As an added touch, the MG7550 features a 2-year warranty straight from the box.

The next offering is again from Netgear, although this modem/router combo is faster than the last. Right out the gate, the Nighthawk C7000 brings speeds of up to 960 Mbps, which is much faster than the data plans most consumers get from their ISP’s. This overhead should leave plenty of room to upgrade speeds in the future.

As far as bandwidth goes, this router is not lacking either. With 24x8 channel bonding, this router should be able to handle heavy traffic from multiple devices and uploads will not be hindered either.

The C7000 also has a 1.6 Ghz processor inside, which is not too common for routers, but should bolster performance. As for ports, this router has 4 Gigabit Ethernet ports, which is a fair number. This router is a higher-end choice that offers speeds and bandwidth to match.

The ARRIS SURFboard SBG7600AC2 is a powerhouse modem/router, with blazing speeds and excellent bandwidth. For those willing to part with a bit more cash, this router provides unparalleled performance.

This product can handle Wi-Fi speeds of up to 2350 Mbps, which blows the other routers on this list out of the water. These speeds should effectively future-proof it, and prevent you from having to buy a new router for a long time.

Besides high speeds, this router has 32x8 channel bonding. Such a high configuration should allow many devices to access the internet, downloading or uploading data without bottlenecking or causing traffic.

The Netgear N600 is a more budget-oriented modem/router, but it still provides great value for its price.

It brings speeds of up to 340 Mbps. This isn’t exceptionally high, but it should get the job done for those on a budget. After all, most internet packages are under 100 Mbps anyhow. If you’re looking to upgrade your speeds in the future, though, this may not suffice.

A nice feature for the price is the inclusion of dual-band Wi-Fi, which opens up your network and connectivity options. Other upsides include WPA/WPA2, a WPA button, and DLNA sharing. Unfortunately, this router has just an 8x4 channel bonding configuration, meaning that under heavy traffic it is much more likely to slow down and affect internet speeds.

This router works with all major ISP providers, but is especially easy to set-up for Comcast users.

Another excellent entry from Motorola is the MT7711. Before going any further, it is important to note that this modem/router is built to work only with Comcast. If you do have Comcast though, the wide variety of features on this product make it a great choice.

For starters, it has a 24x8 channel configuration, which should provide plenty of bandwidth for the vast majority of users. It also has dual-band Wi-Fi, to provide a choice between signal range and speed.

Along with four Gigabit Ethernet ports, this router has two phone ports. These can be connected to support Xfinity Voice telephone service. It even includes a Broadcom chipset, geared to stop DDOS attacks.

The biggest downside of this router is probably its speeds, which cap at 400 Mbps. This isn’t even all that slow, but compared to the other high-end features, it is somewhat lacking.

The final wireless modem/router combo on this list is the ARRIS SURFboard SBG10. For a price that won’t break the bank, it still brings value to the table.

Surprisingly, it has a 16x4 channel configuration, an oddity at such a low price. Unfortunately it is only approved for plans up to 300 Mbps, which makes it the slowest router on the list. If you’re planning to upgrade, you should look at another router. However, if you live in a rural area, or don’t want to spend a lot on your internet, then this should definitely suffice.

However, this router has great flexibility thanks to the addition of dual-band Wi-Fi.

What Is a Modem Router Combo?

If you want to access the internet, you will need two crucial pieces of equipment: modems and wireless routers. Most people have heard of these but may not know exactly what they do.

A modem is a piece of hardware that connects directly to your ISP and transforms the raw data into a format that can be used by a computer. Most modems use a coaxial input (coax input), which is the same kind of connection that your cable box uses. Older models use a telephone jack, but almost no modern modems still use this kind of input.

Then you have the router which takes the signal that the modem transformed and makes it available to connect to multiple devices. Strictly speaking, you do not need a router as you could just plug your computer directly into the modem. However, a router allows you to join multiple devices to the same network simultaneously by providing a central “hub” for that signal. Older routers normally use ethernet cables but most modern routers have wireless capabilities in addition to ethernet ports (you can’t beat a direct connection if you prioritize stability).

A modem router combo is a single device that combines a modem and a router. Modem router combos are very useful as they provide a single piece of equipment you have to deal with to manage internet connectivity. This makes connecting to the internet very simple; all you have to do is plug in the one device and you are ready to go.

How to Choose the Right Router Combo

A router/modem combo is a great way to reduce costs and clutter from cables and extra devices. Before buying a router/modem combo, make sure to take the following considerations into account. If you are interested in some more specifics, then we have roundups for modems and routers that both go into a little more individual detail. (Of course, you could also choose to buy the two devices separate.)

There are a couple of ways you can check. First, you could just google “[ISP] compatible modems” and check the Approved Modem website. You could also check your ISP’s official website. If all else fails, you can simply call your ISP and ask.

DOCSIS (Data Over Cable Service Interface Specifications) is a standardized interface that determines how your modem transmits data over the coaxial cables. Essentially, the DOCSIS protocol version tells you what the absolute maximum downstream and upstream capacities are. Currently, DOCSIS 3.0 and 3.1 are the most common versions. Most ISP providers offer average broadband speeds of about 60 Mpbs, so a DOCSIS 3.0 protocol will be fine for most users.

Most of the time, you will not have to worry about this metric unless you want to absolutely max out your internet capabilities. Most modern modem routers have at least 16 downstream channels, which should be more than enough for normal internet purposes.

With this in mind, the purpose of buying a modem router combo with high upload/download speeds is to “future-proof” your setup so you don’t have to buy a new router if you upgrade your internet service. That being said, depending on where you live, it might not be viable for you to upgrade to a service that is fast enough to take advantage of even our slowest router/modem, so, in that regard, you don’t really need to worry.

Most modern modem routers use 2 kinds of broadcast frequencies: 2.4GHz and 5GHz. The difference between these two frequencies is their range and bandwidth. Specifically, each channel makes a trade-off between the two.

For higher frequencies, there are more waves passing through a given point each second, which means more information can be accessed per unit time. The higher frequency means that the signal is more likely to be absorbed or blocked by the environment, so it has less range.

Lower frequencies, by contrast, transmit information slower, but they are less likely to be absorbed by things in the environment, giving them better range.

Dual-channel routers are increasingly common and offer both a 24.GHz channel and a 5GHz channel that can be accessed separately. Of course, splitting the labor between two channels on your modem router means your router has to split computing resources between the two, so the channels may not function at optimal performance if you use both at the same time.

Best Gaming Keypad for MMOs and MOBAs in 2019