Today, we’re going to walk you through our picks for best GTX 1650. We’ve selected four cards for you to choose from, and depending on your needs, any one of them may be the best 1650 card for you.

We’ll be using a lot of technical terms and jargon– if there is anything that you don’t understand, we’ve included a detailed buying guide at the bottom of the article. This includes performance info and how to decipher the different specs.

For those of you concerned about the RX 570, it is worth noting that the GTX 1650 does occupy a meaningful market segment that the RX 570 does not, hence why we’re still covering it with this article. If you want to learn why, then consult the buying guide at the end of the article. 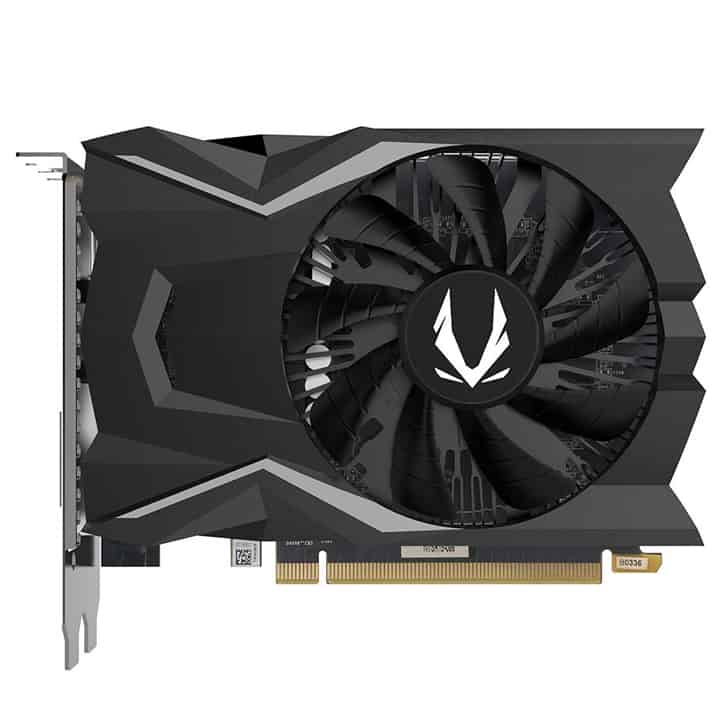 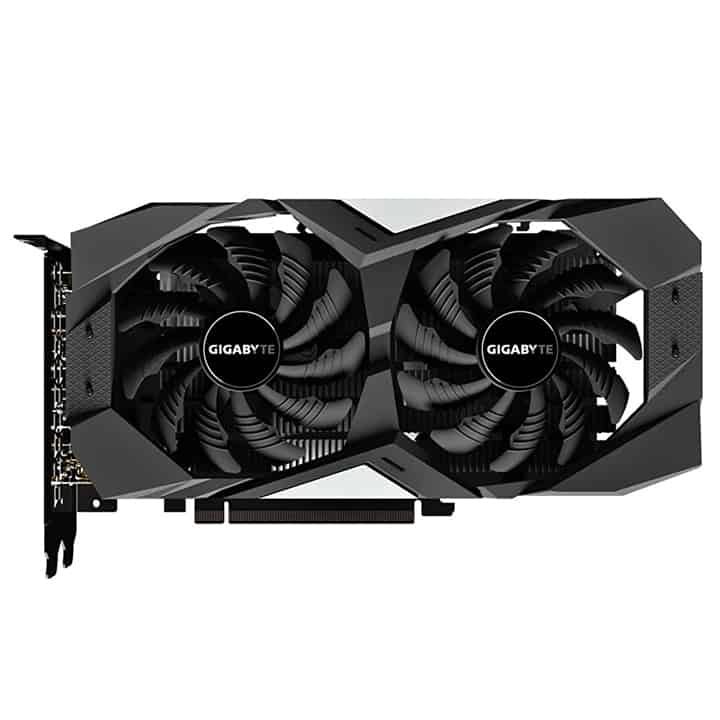 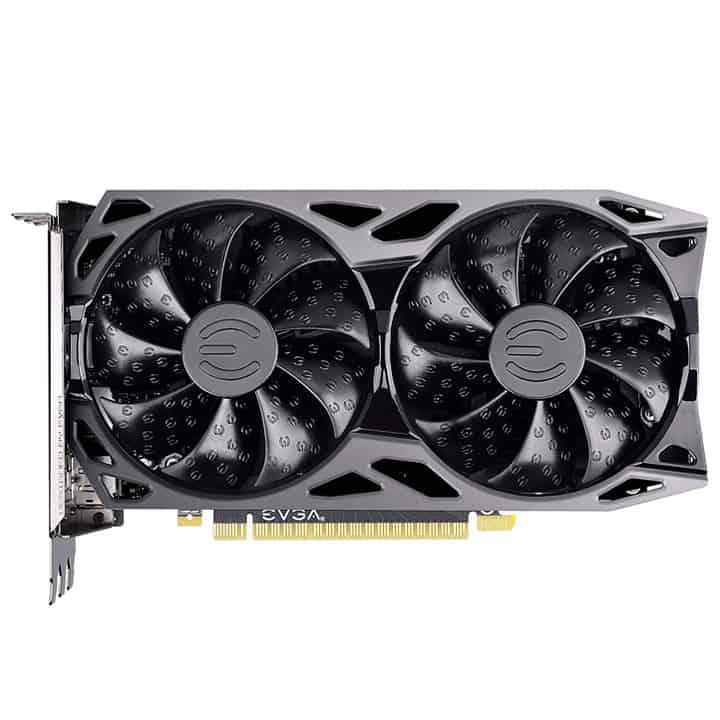 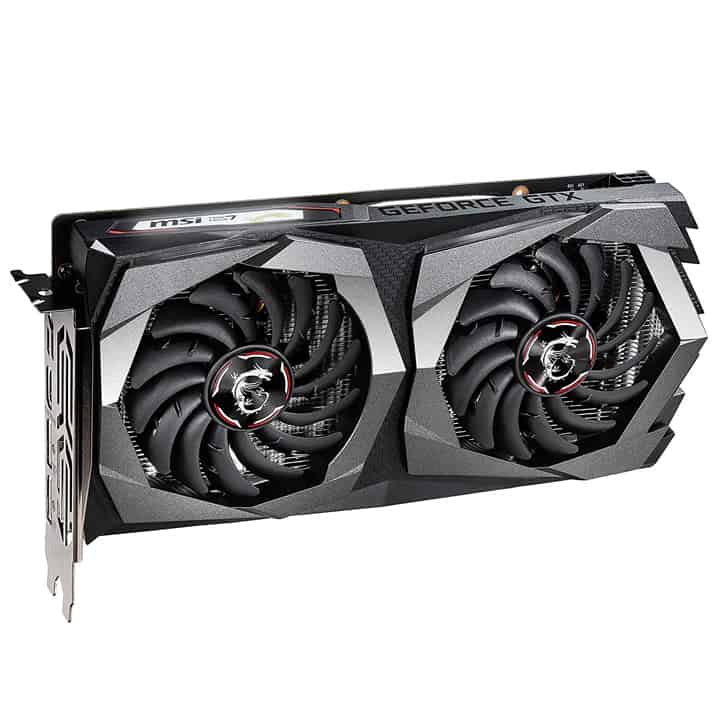 The best GTX 1650 card for most users

We believe that the best reason to buy a GTX 1650 is to get a small-but-powerful card for 1080p gaming. The ZOTAC Super Compact GTX 1650 does exactly that, with a length of only 151 mm and a 2-slot width that shouldn’t be an issue for most PCs. Even prebuilt desktops or office machines should be able to take this card, so long as they aren’t slimline or specifically small form factor.

Another thing that makes this card great for users who are reviving old desktops or office PCs is the fact that it’s powered completely by PCI Express power. This means that you won’t need to replace your power supply or run an additional 6-Pin power cable, though it also means you shouldn’t and probably can’t overclock it very much.

Speaking of clock speeds, this card does come in just a bit above the GTX 1650’s reference clock… but not by much, and lower than the other cards on this list. That’s the price to pay for size and compatibility, though, but that’s a fair tradeoff in our book.

If you don’t need a card with specific length restrictions, and you want a version of the GTX 1650 that’s just a little bit souped-up, the Gigabyte Windforce card is probably the right choice for you.

It is a bit longer than other cards on this list, but fairly standard for full-size GPUs, especially higher-end ones. The width is your typical 2-slot, which means you shouldn’t have much trouble.

The larger dimensions pay off, though, because this card boasts two sizeable fans and a large heatsink. That means better cooling and overclocking headroom, which is demonstrated by its very respectable factory overclock. We’d be surprised if you couldn’t push this one by at least a few hundred more MHz, though, since it doesn’t seem particularly stressed with its current clock speed.

Unlike our #1 pick, this card is unlikely to fit inside smaller PCs. Its need for a 6-Pin power connector also makes it a no-go for prebuilt PCs with weak (sub-400W) or proprietary (non-ATX) power supplies.

The EVGA XC Ultra Gaming GTX 1650 is going to be a favorite for many users.

It’s fairly short, which means it shouldn’t cause any clearance issues in a Mini ITX or Micro ATX PC build. It has a dense heatsink, with a dual-fan cooler design, which should enable great overclocking headroom. It actually has the highest out-of-box factory overclock of all the GTX 1650s available on the market, too, which makes it even more enticing for those who want the best performance-per-dollar.

However, there are a few downsides worth noting.

For one… the price is a bit up there. (Ignore the $400 list price-- that’s inflated so they can discount it and make it look like a crazy deal. The real price of this card will always be around ~$180, give or take $20.) That’s a lot to ask for a GTX 1650, especially when it’s in spitting range of the GTX 1660. If you firmly need to keep your budget under $200 and you still want the most possible power with the shortest possible length, though… this card still strikes a chord.

While the short length of this card does make it more likely to work with prebuilts and refurbished PCs, there is the issue of its unusual thickness. This is a 3-slot card-- on a standard ITX or MATX case, that wouldn’t be an issue. But with, say, custom boards and chassis from Dell or HP? Well, then you may not have enough slots to spare. Additionally, you’ll need an available 6-Pin power connector, which is out of reach for many prebuilts.

If you aren’t sure that this card will fit in your PC, you’ll definitely want to triple-check beforehand. If you meet the prerequisites of a PSU at or above 400W, horizontal clearance of 202+ mm, and three available expansion slots in your chassis… you should be fine.

This is technically the best 1650 card, if you’re willing to overclock it. Its cooling design is better than pretty much every other card on this list, and that should permit for higher overclocks than even the EVGA XC Ultra listed above. Even the out-of-box clock speed comes within spitting range of its EVGA rival.

You also have the light cosmetic benefit of customizable lighting, though unlike higher-end Gaming X cards from MSI, this is not RGB.

While this is a great card and arguably the best overall GTX 1650, its price is raising a few eyebrows. If you’re okay with paying about ~$30 or so extra, you can afford an entry-level GTX 1660, which will definitely outperform this card.

If you aren’t sure how to pick a card from the above round-up, or simply don’t understand all the jargon… don’t worry. We have you covered.

For reference, the MSRP GTX 1650 price is $150. If your goal is to spend as little as possible, keep that in mind when making your selection.

With that said… let’s dive into this buying guide, proper.

How does it perform?

The GTX 1650’s closest rival is the RX 570 4GB. Like that card, its primary purpose is to be used for 1080p gaming, with the ability to push modern games at high/max settings and 60 FPS at a 1080p resolution. Since both cards have limited VRAM, resolutions like 1800p and 4K are out of the question, but 1440p may be attainable in a few games, especially with adjustments to AA and texture resolution.

The GTX 1650 is based on the same Turing architecture that the other GTX 16- series and RTX 20- series cards are. Unlike those cards, though, its NVENC encoder is actually a Volta encoder, which means it has worse performance for capturing, recording, and streaming gameplay. This was never exactly a streaming-tier GPU anyways, but that is a notable downside worth mentioning.

For 1080p gaming that’s superior to what consoles are putting out, the GTX 1650 is a solid pick. This is where we get to the bitter pill for the Nvidia fanatics, though.

The GTX 1650 is not only more expensive than the competing RX 570… it also performs about 10% worse in most scenarios.

While it’s true that the GTX 1650 loses in straight-up pricing and performance compared to the RX 570, there are still valid reasons to purchase this GPU. We’ll list those advantages below.

If the above benefits don’t really matter to you…we recommend getting an RX 570 instead.

A brief word on clock speed

You’ll notice that some of the cards on this list have higher clock speeds than others, or have more overclocking headroom. While it’s true that a higher clock speed does equal more performance, it’s important to note that at the end of the day… these cards are all using functionally identical GPUs. Even with a great overclock, you’d be hard-pressed to push performance past a 10 percent improvement.

The main reason to buy a card with a higher clock speed is to save yourself the trouble of overclocking it yourself. The smaller cards with smaller coolers may not be quite as overclockable, though.

Length, width, and why they matter

Length and width are the measurements that determine if a card will fit into your chassis of choice. (Provided it’s a standard ATX/MATX/MITX chassis– we couldn’t find any low profile cards that would fit into, say, a slimline office PC build. Sorry, guys.)

The measurement that usually matters most is length, which is measured in millimeters. Especially in a prebuilt or an ITX PC build, this is the most likely to determine whether or not your GPU can fit inside your PC.

Width matters a bit less, since few people are using non-GPU expansion cards or multi-GPU setups. Most PC cases will have at least two or three empty slots, which is more than enough for a GPU.

A rundown of ports

The most common ports you will see in a modern Nvidia GPU are DisplayPort, HDMI, USB-C (for VR), and DVI. The most common configuration is 3 DP and 1 HDMI, but this changes with the GTX 1650.

The GTX 1650 cards in this roundup overwhelmingly limit you to 3 outputs overall. (The Windforce has one extra port.) USB-C is nowhere to be seen in any of these cards, and the ZOTAC is the only one with DVI support.

Otherwise, expect 2+ HDMI or DisplayPort on these cards, but not both at once.