Whether you’re a dedicated gamer or looking to increase your productivity for cheap, we have the best budget PC cases for you

by Brian Murray
in Reviews

Building a custom PC is a delicate balancing act. Saving some money here and there on things like the case and the fans can lead to more room in your budget for a better GPU or CPU. On the other hand, if your case doesn’t provide you with proper airflow then you could damage your parts and a lackluster I/O can make using your rig a pain.

Don’t worry, though, that doesn’t meant that there aren’t good, cheap computer cases. In fact, we’ve done the research and have come up with 5 cases that can help you reach equilibrium in this balancing act. If you’re interested in finding the best budget case out there then take a look at our budget PC case reviews below. 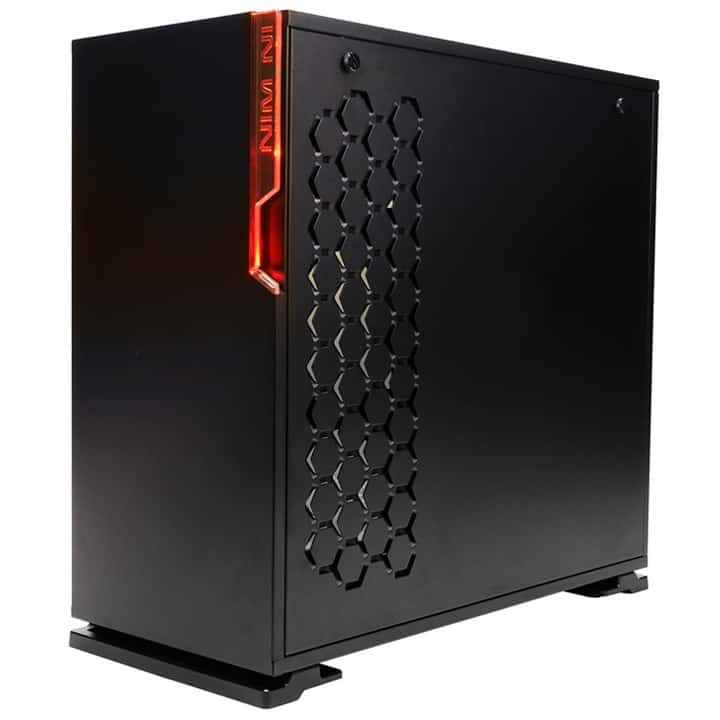 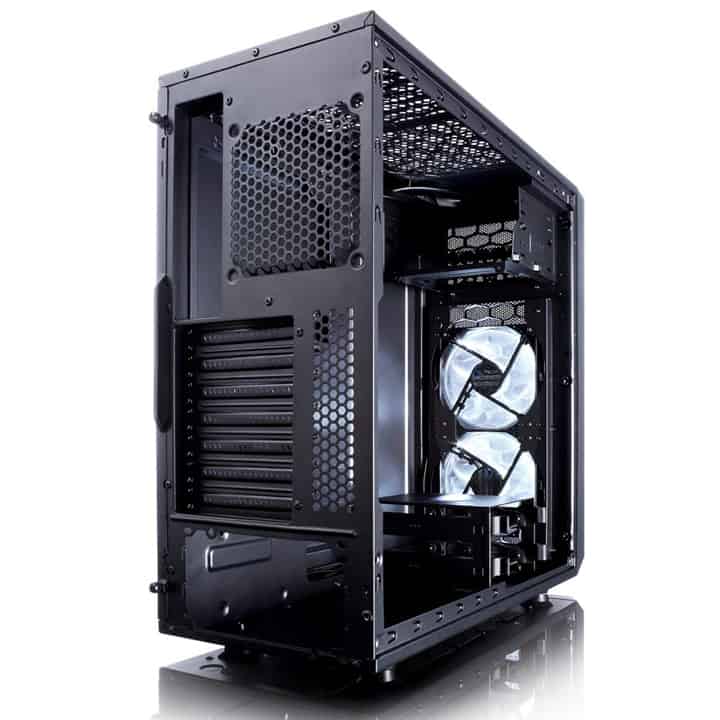 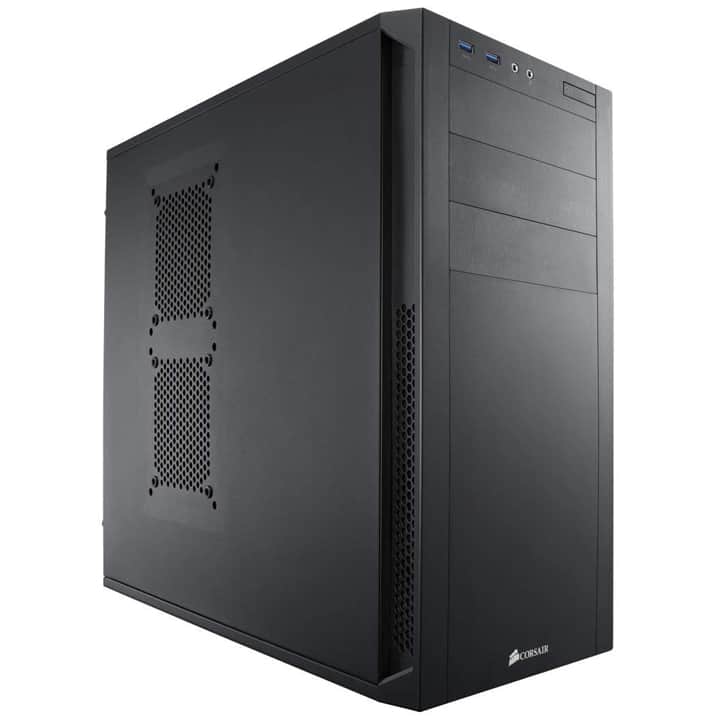 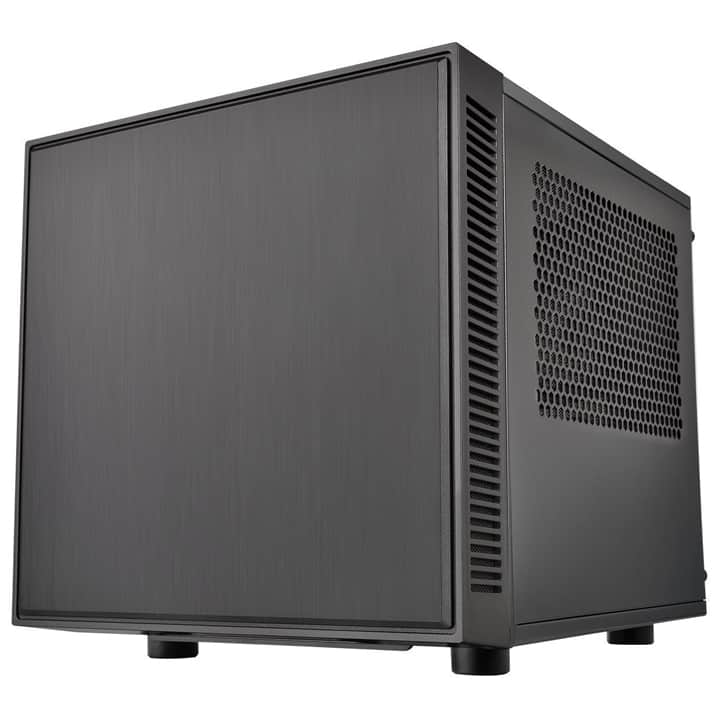 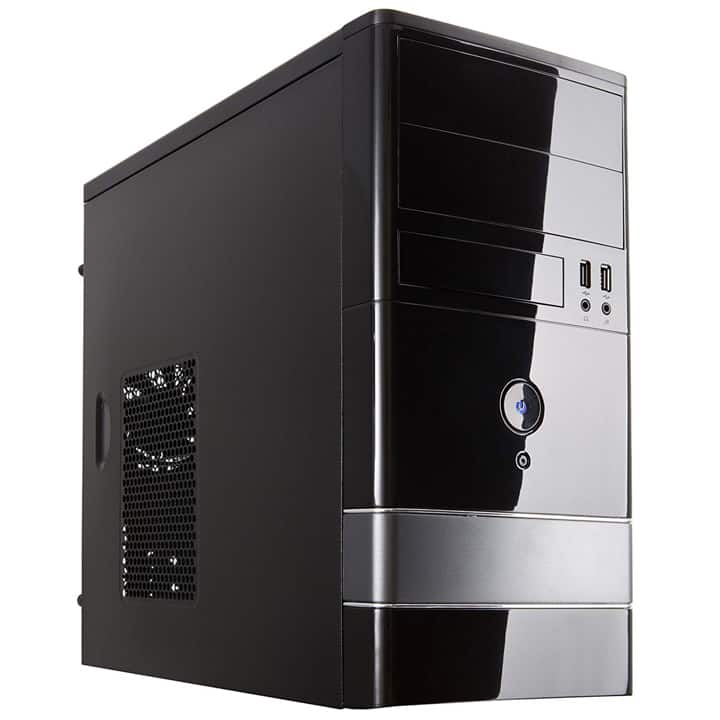 Admittedly, looks are subjective, but it’s hard to find a case that looks better than the InWin 101 at this price point. It comes in a couple of colors-- black or white-- and has integrated LED accents that can be blue, pink, or red. This minimalist case actually has a pretty premium feel thanks to the toolless tempered glass panel on the side, which is pretty much unheard of in a budget case like this.

The internal layout of the case is interesting and makes it stand out, even among much pricier cases. For starters, there is a GPU bracket to help prevent your graphics card from sagging which can help extend the life of the card and your motherboard.

Additionally, the power supply is designed to be top mounted in this case, which is unusual these days but actually allows for better airflow to your power supply. This also helps keep the heat of your PSU away from more temperature sensitive components.

Perhaps the most surprising thing is just how water cooling friendly this case is. It can fit a 120mm radiator in the rear, a 240mm radiator on the side opposite the tempered glass, or a massive 360mm radiator in the bottom. This thoughtful design and cooling capacity make this easily the best budget ATX case on the market.

The Fractal Focus G is probably the king of airflow since the entire front, top, and bottom of this case are made from a breathable mesh that lets air flow freely into and out of your case. Good airflow is important for keeping your parts cool and running their best, especially in builds that have dedicated graphics cards that throw off a ton of heat.

Don’t worry about dust though, because the massive breathable surfaces are protected by air filters that prevent dust from making its way into your case. While the Focus G comes with two 120mm fans included, it can accommodate up to six fans and a variety of radiators. Fractal has designed this case to be capable of accommodating high profile CPU coolers as well, which nicely compliments the overall high airflow design of this case.

The side panel features a plastic window; tempered glass would’ve been nice, but this is a budget case. The front of the case has two 5.25” drive bays, which dates this case somewhat since disks have largely become obsolete.

The top and front hosts the I/O, with the latter being a weak point as it only includes a single USB 2.0 and a single USB 3.0. Unfortunately, the header cable in the case for this anemic I/O are also very short causing this case to be a bit of a hassle to set up with some motherboards.

If you often find yourself running out of storage space on your computer due to an ever-expanding library of games, movies, and music then the Corsair Carbide 200R is probably the best cheap pc case for you. This case has an incredible amount of storage space for its price and size with a total of 11 drive bays.

The drive bays include four 2.5” bays, four 3.5” bays, and three 5.25” bays. This should allow most people to store their Steam library, plenty of movies, or enough music to last a lifetime. The case is also very easy to build in with an almost entirely toolless design. Corsair claims that the only time you’ll need a screwdriver during the building process is to put the motherboard in.

If you don’t plan to take full advantage of the various drive bays, then you still have plenty of viable configuration options. Depending on the number of drives, you can outfit the 200R with as many as eight fans, as well as a number of different radiator configurations. While you can obviously get a lot of airflow in this case, it’s not nearly as breathable as the something like the Focus G.

This case, like others on this list, really falls apart once you look at the lackluster front I/O with only two USB ports, a microphone jack, and a headphone jack. That being said, the variety of drive bays and customizable layouts makes this the best budget mid-tower case for those looking for maximum storage capacity.

For those who are small form factor enthusiasts on the hunt for a cheap computer case, we suggest the Thermaltake Suppressor F1. At this price, It’s hard to beat the features and capabilities of this powerful, yet tiny case.

The F1 is a simple cube-shaped mITX case that boasts large grills on each of the magnetic side panels and a plastic window on the top that lets you see your hardware.

Cooling can be a major issue for small cases since with so many hot parts being stuffed into a small space. To combat this, there are several places where you can use large fans. Moreover, remember that both side panels have large grills for airflow, and conveniently around the GPU and CPU coolers at that.

The front can take a large fan or radiator. In fact, the case comes with a 200mm fan included pre-installed into the front.

The last case we’re taking a look at is the Rosewill Micro ATX case. This case is by far the cheapest PC case on our list, and is the only one in our roundup that falls under $50.

In many ways, you get what you pay for with this case. The case is mostly constructed from steel, which is promising, but some components on the front are plastic. There is also no side panel window.

The airflow is less than ideal. The areas that air can enter and exit the case are significantly fewer than the other cases on our list, and outfitting this case with water cooling isn’t an option. That being said, the case does come with an 80mm and a 120mm fan preinstalled which makes it a great value. However, if you are running a really budget oriented build and only intend on using the PC for light gaming and browsing, then this might not become a huge problem for you.

Options for storage space are also limited-- and putting any solid state drives in the case will require some work-- meaning this is far from being the best gaming PC case.

How to Pick the Best Budget PC Case for Your Needs

The PC case you pick determines a number of things about your build. Because of this, when searching for the best budget computer case it’s important to know what your priorities are when shopping for a budget computer case. Let’s take a look at a couple of the things you might focus on while browsing cheap gaming PC cases.

If you’re interested in getting the most performance out of your system, like in the case of gaming, then you’ll almost definitely want one of the mid-tower form factor cases on our list. This means any of the first three, either the InWin 101, the Corsair Carbide 200R, or the Fract Focus G.

These mid-tower cases can fit full-size ATX motherboard, which have more expansion slots for things like graphics card, as well as more space for RAM modules. ATX motherboards are pretty much the industry standard in a majority of computers and can be used for anything from simple home computers all the way to pretty beefy workstations. The ability to accommodate multiple GPUs and tons of RAM make it suitable for heavier tasks like intensive rendering or 3D modeling.

The latter two cases in our roundup use either mATX or mITX motherboards which will have fewer PCIe slots and fewer RAM slots. This lack of expandability makes them less than ideal for workstation use, but a single GPU is enough in most systems to play pretty much any game on the market today.

In addition, the two smaller cases will not be able to fit all the hardware you might want. Longer graphics cards will not have enough clearance to fit into these cases, and even some CPU coolers can be too tall to fit.

Cooling plays into the performance of a system, but is important enough in other ways to be worth mentioning on its own. Better airflow and cooling in your case will lead to higher, more stable performance for both your GPU and CPU, and will also improve the lifespan of your hardware.

If you plan to try and use water cooling in your build, then consider the InWin 101. This case has tons of mounting options for radiators and is the only case we looked at that can accommodate a 360mm radiator.

The Fractal Focus G is probably the best option for those planning to use air cooling as the top, bottom, and front of the case are entirely made from breathable mesh that also acts as an air filter.

The potential storage of a given case is determined by the number of drive bays it has. There are generally three types of drive bays: 2.5”, 3.5”, and 5.25”.

If you’re looking for a budget case that offers as much storage as possible, we recommend the Corsair Carbide 200R. This case has four 2.5” bays and four more 3.5” bays for an incredible eight drive capacity. That is a bit overkill, though, and if you buy larger capacity drives to start with, then you really shouldn’t need upward of 8 drive bays.

I/O stands for inputs and outputs, and refers to the various jacks and USB ports you will find on the front of pretty much any computer case. Depending on how you use your computer and your setup you’ll want to look for different things.

While USB type-C is the most modern USB connector on the market, none of the cases in this price range have this as an option. There is however several USB 2.0 and 3.0 ports on these cases. USB 2.0 is an older protocol and is mostly used for mice and keyboards. USB 3.0 boasts significantly faster data transfer, so look for these if you frequently move files to and from flash drives.

Best SSD for Gaming 2019: The Top Solid State Drives of the Year

Writing until my tendons hurt, overclocking until my CPU melts, and gaming until the sun comes up. Trying to become a cyber-renaissance man. Somewhere between Hideo Kojima and Linus Tech Tips.