When it comes to buying a monitor for gaming, not everyone has a stack of their parent’s money to blow on the widest, baddest-looking screen. In fact, we gamers are typically frugal people, who are always on the hunt to save a few bucks. Many of us are still in school, working at crappy part-time jobs so we can afford a small piece of gaming glory for ourselves.

In short, most of us just want something that gets the job done. Bonus points if the monitor also plays nice with the rest of our rig, as to not become a bottleneck for potential performance issues such as lowered frame rates and longer response times that can affect our swag.

So, in response to our demands, the big boys of the gaming world have finally got their act together and have released a range of performance monitors at discount prices. Some of these models aren’t even worth discussing, but some have passed our BS meter with flying colors.

One monitor that is usurping the notion of expensive gear is the R240HY released by Acer. The ‘R0’ series of screens are about as basic as you can get, but they still deliver an impressive amount of value in a relatively cheap package.

So let’s go over the features of Acer’s R240HY, as well a dissect if this cheapie is worth the effort to buy it.

In summary of the above, the screen has basically everything you could want out of a monitor that costs less than a hundred and fifty bucks. A 23 inch screen is good enough — although if you are splitting your desktop across two or multiple monitors then you may want to think twice about this one. However, for most of us, 23 inches is more than enough to feel immersed in the gaming experience.

One thing that we really appreciated about the specs for this one is the fact that it’s a full high definition display, which means you’ll be able to play your favorite games at the highest settings without worrying if your screen is able to keep up with the rest of your rig.

Now, let’s talk for a second about the screen’s refresh rate; it’s not the best. Most monitors have a refresh rate of 1 millisecond or less, which is known to reduce screen blurring when there’s a lot happening on the battlefield or otherwise.

4 seconds for a gaming screen is quite the number. Although we’ve definitely seen worse in our time. The refresh rate does put a big question mark over the monitor’s ability to keep up with the pace of your games. So be warned. 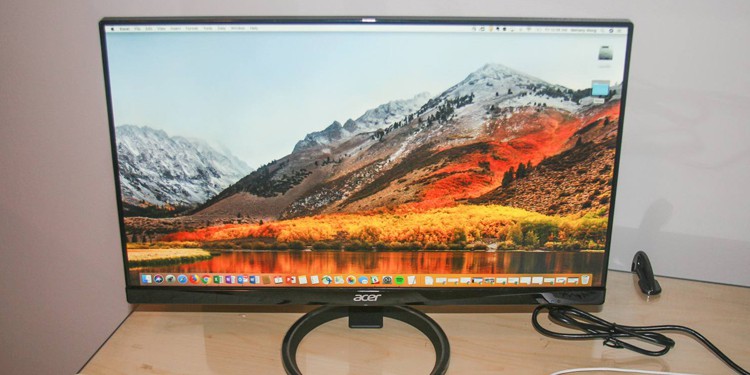 So now that we’ve looked at what’s under the hood for the R240HY, let’s take a step back and look at the value it provides overall.

For a discount model, Acer’s R240HY comes with a few enhanced features that makes it a steal when used for its intended purpose. Some of these features are not even included on the most expensive of models, so it definitely gives the R240HY an edge over others in the marketplace.

When you are playing your favorite games for hours on end, usually your eyes will get a little red and sore. But thanks to Acer’s new developments in flicker-less technology, eye strain is now a thing of the past — even when you are playing late into the night.

The R240HY literally does not have a frame, which is the thing that surrounds the edges of most monitors. Frames are annoying because they take up precious viewing real estate that could be used for, you know, actually seeing what’s going on in front of you. The lack of a frame or border on this model means that you get a full 23.8 inches of gaming enjoyment.